I’ve been graciously asked to be a part of the 99 Deaths of Jar Jar show opening at Designercon by the good people over at DKE Toys. 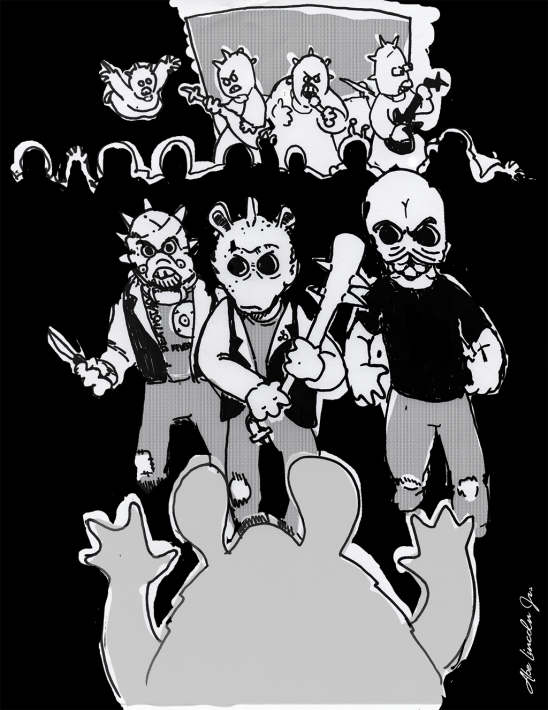 My piece is an amalgamam of references from the early days of Star Wars and old tyme Hardcore.
The piece is entitled – “Kenobi, M.E. – Next Stop Nowhere” after the infamous “Punk Rock” episode of Quincy that got everything possible wrong about Punk at the time.

Set in the Mos Isley Cantina, a “wretched hive of scum and villainy” is the perfect place for Sunday hard core matinees and the brutal beating of of a certain Gungan who thought the safety pins in his vest would get him inside the “scene”.

When reached for comment, Princess Amidala was quoted: “Don’t underestimate this particular kind of music. You tell a kid, a vulnerable kid, over and over again that life isn’t worth living, that violence is its own reward and you add to it the kind of intensity that this music has, and you just might convince him.”

Mr. Binks was admitted to Empire Methodist Hospital with several broken bones and multiple stab wounds to the head, neck and chest. It is uncertain if he will pull through.

Currently there are no suspects, but local Empire Law Enforcement is asking for help and looking for witnesses to the crime.